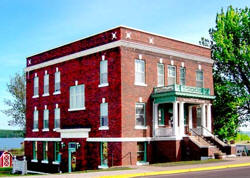 The author, Deborah K. Frontiera, has recently learned that the Houghton County Historical Museum in Lake Linden, MI, has a special display in the Veterans Room of the museum on Robert LaMotte, member of the Lady Be Good crew, (Chapter 16) who was a Lake Linden resident, and the reason the propeller from that plane came to rest in Lake Linden. The museum is open most days and weekends from Noon to 4 p.m. This photo was taken with the permission of the museum board.